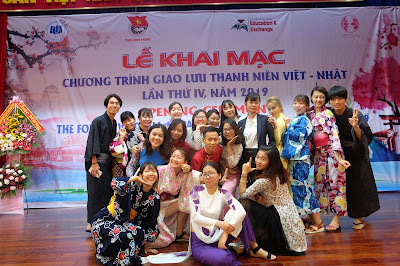 It has been a month since we separated. To be honest, a couple of days after the program, sometimes in my dream, I felt like the program was still happening and we were still together. I really miss all of you.
My 2019 summer could have been like every summer ever if it had not been for VJEP 2019. First of all, let’s bring it back to the beginning of May when everything started. I was invited by a friend, Mingo, who worked in the organizing team. Although I’m always interested in such inter-cultural activities, I did not set high expectations when I first knew about the program. AAEE sounded so big to me, they had already organized 6 programs of VJEP since 2013, the applicants were from many top universities in Ho Chi Minh city – all that things dragged my feet. Anyway, one of my favorite quotes is “nothing is impossible”. And on May 12th I received the first e-mail from the VJEP organizing team informing me that I had passed the application round. And from that moment I kept trying my best from round to round and I knew what I was trying for was worth it.
Eventually, on May 31st, I officially became a Vietnamese delegate of VJEP 2019. From that day to the day the program officially began, we had to prepare many things together. And that is when I started to get to know other Vietnamese participants more. I did not talk so much at first, because I’m quite an introvert person. However, the other’s enthusiasm and creativity pushed me to talk. We had to prepare for five tasks. Everyone was so dedicated and I was always looking forward to meeting them at each Orientation session.
Now I still remember how eager I was for August 16th, my words cannot describe. At first, there were 4 early birds, we talked about all kinds of things, about how Phuong studied Japanese and Chinese, about Linh and her first crush and how she hurt her groin. The stories kept going on from 4pm till the evening, starting with 4 Vietnamese delegates, and then 6, and then 8, then all 10 members of us. We really got along and at that time I knew that I had found good friends that fit me. Around 10:30 that night, the Japanese delegates arrived. Yui was the first one of them that I talked to. In dorm 1, everybody was talking to each other, the room was full of their generous greetings. I tried to find Arina – my buddy – but I couldn’t because she took a different flight. It was not until midnight, I suppose, that I could meet her. We started with small talks, then we talked about more things. That night, the room was full of friendliness.
I was really impressed by the Japanese national performance. It was a unique experience that I think I will never have the same thing anywhere else. We were really excited and I will never forget that performance. They are so creative and talented to create such amazing performance. Hiking through Bu Gia Map National park is also an unforgettable memory for me. It was my first time to visit a national park, to go hiking and to cross a stream. Especially I did that with such amazing friends. I believe some of you may be obsessed with leeches after that. Anyways, good or bad, joy or fear, those memories are a treasure.
Additionally, I need to say something about the main theme of VJEP 2019. I had seen many news and read many articles about protecting the environment, finding an alternative source of energy or building a sustainable community but honestly, it was the first time I had heard about the term “Sustainable Development Goals” or “SDGs”. We were assigned to make a green business plan. I barely knew about the problem, so I had to do lots of searching and read about many things. And just because of that, I could learn so much about SDGs and agriculture. With my certain knowledge about the environment, I feel I have more responsibility to join a hand to create a sustainable community.
During the program, I had several chances to talk with Mr. Seki. At every time, I could feel the enthusiasm and positive energy. I wish I could have talked with him even more. Anyway, I will never forget when he said the purpose of VJEP is not just to create 2 weeks of cultural exchange, but to create relationships among people of young generation in Vietnam and Japan. Those relationships need to be maintained and grow gradually until someday we can do something bigger together. That is not only his ambition but also my mission, our mission.
Thank you for everything! And see you again…