UNITE was a rollercoaster of new experiences: many fun, most engrossing, and all valuable. Above all, UNITE was a chance for me to learn and grow. I would like to pick up three elements where I felt I flourished the most and explain why it was possible, and how it is important.

Firstly, and most obviously, my attitude towards environmental problems. This was achieved through three different factors: the main theme, the effect of four countries joining together, and the program schedule. Since UNITE was a place where students from all over  Asia could join together and discuss environmental issues as one, it was only natural that my interest for such problems would grow. Although I had a vague idea on the back of my mind that the environment was in danger, and that some action had to be taken, it had stayed a  mere idea until UNITE brought it to my attention. More importantly, the fact that four countries participated in the event had a critical effect. Living in Japan, it is too easy to become blunt to the problems occurring around the world. However, a participant from  Nepal changed my lukewarm attitude completely. He talked about Kathmandu, the capital of Nepal, and taught me in great detail of the environmental issue it was facing, namely air pollution. It was eye-opening how somebody my age was seriously contemplating and educating oneself on environmental issues.

As the program continued, I learned about other problems in other countries. In Bangladesh, plastic disposal and plastic wastes were harming the environment, in Vietnam, water and soil pollution was a serious problem. Hearing other participants made me realize that environmental problems were not a topic for safekeeping in your mind, it was a very real, actual issue that needed to be taken care of as soon as possible.  Moreover, when asked about the issues surrounding Japan, it was astounding how textbook knowledge was the only thing I could come up with. This was another reminder of my disinterest and a lesson to myself that I had a long way to go before I could be on the same lines as the students from different countries. Finally, I would like to briefly point out the way this program was organized and how it was effective. The program was for 7 days, and each day was 5 hours of discussing, debating, and researching. According to Ebbinghaus’  forgetting curve, repetition and intensity are key elements that ensure that learned material is not lost and forgotten. The program schedule was in accordance with this fact. For all these reasons, I believe UNITE altered my unenthusiastic behaviors towards environmental issues and made me not only interested but eager to take action.

Secondly, English and communication using English. To explain this part, I would like to walk you through the program and point out the how and why. Although officially UNITE  is for one week, there was actually a pre-program the day prior. It had been quite some time before I took part in any English conversation, let alone with members from all over the world. What I had been anticipating was not being able to translate my opinions into  English. However, the pre-program helped me clear my anticipation. The pre-program started with brief introductions and ice-breaking; since it only required very simple English,  it helped me ease my mind into using English. After warming up for a bit, the participants were put into smaller groups and made to discuss a movie and news articles on environmental issues. Since I had quite some time to prepare, the discussion went smoothly and made me confident and comfortable in using English. This mentality was important, as it gave me the courage to speak up and express my opinion. Days 1 through 3 were spent getting to know each other and the main theme at hand. After becoming confident in the material,  days 4 through 6 were spent with team members, getting ready for the final presentation. It was especially hard work coming up with an interesting topic to work towards, and even harder work making a feasible and innovative solution; it could not have been done alone. It was like carpentry: cutting, shaping, and polishing to perfection. UNITE met its finale with the final presentation: each team was supposed to give a 10–15-minute presentation with  Q&A. To think on the spur of the moment and answer questions was quite an experience:  but a satisfying time indeed. As I have shown you, UNITE had a packed schedule, and  English was the only choice the whole time. Whether you were reading articles and papers alone, or talking and working with your group, or giving a speech/presentation, the only way to make yourself understood was in English. Through the 8 days I spent working on UNITE,  I was able to exercise and brush up my English skills. With COVID 19 and my university classes (very science-focused), it was difficult to make time studying English let alone using it fully. Therefore, UNITE was a valuable opportunity.

Thirdly and most importantly, mental growth. Although UNITE’s official goal is to “come up with an innovative and feasible solution to environmental problems'', I believe the true goal  was to learn from the other participants and advance as a person. Mentally, I learned three valuable lessons: stepping out of your comfort zone, follower and leadership, and enthusiasm to learn. Let me explain: UNITE was a continuous experience of stepping out of my comfort zone. To begin with, deciding to apply for UNITE was a challenge in itself. As I  have explained before, I lacked confidence in my English skills, and since I am a very inverted person, I feared not being able to make new friends. Thanks to spring vacation and my friend’s (in AAEE) presentation abilities, I made the first leap. Just because I was able to join UNITE didn’t mean everything would go smoothly after that. I was always nervous when speaking in front of everyone or even just speaking up in my group. I am the type to keep silent even when I don’t understand because I might make a fool of myself. However,  to give the final presentation, it was critical that I understood every aspect of what my group’s presentation was about. If I had even a small question, I had to ask up. This trial made me step out of my comfort zone a little easier: I would risk looking foolish for not understanding. Next, I learned how to work in groups. Obviously, this was not my first experience working in a group. However, previously, all my group members were somewhat similar to me: same school, same interests, same country. UNITE’s group was a different case. With four people from four different backgrounds, it was much harder. Through working together in my team, I learned to both follow and lead. Since I’m somewhat confident in my summarizing abilities, I took initiative when I felt we were straying off-topic.  When taking leadership, I had to give concise instructions and be sure of my decisions.  When following the leader, it was important to support the leader; give feedback, engage,  and encourage. Switching back and forth between the two, I feel that my ability to work as both improved. Last but not least, I regained my eagerness to learn. My role as a university student is to learn; I have heard the tired old saying countless times. Daily procrastination and quick and cheap entertainment made me forget such mentality. As I have already mentioned, my fellow members were eager to learn not only about environmental problems but to learn in general. Their frame of mind reminded me of my duties and inspired me to start studying for the spring semester. UNITE’s selling point is the four countries joining together. If it was not for this, I highly doubt I would have been able to grow so much. Such a mindset can only be valuable in my life, and I cannot thank AAEE enough for the opportunity.

I have talked about three areas where I felt particular growth: attitude towards the environment, English, and mentality, but this is just the tip of the iceberg. UNITE was a  hubbub (in the most respectable and positive meaning) of new culture, new experiences,  and new friends. I would like to rest my pen with thanks to all the participants and organizers and hope that my time in UNITE had made the Earth a little kinder planet to live in. 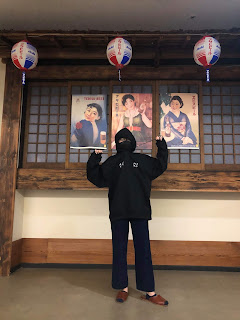