A watershed came from that part of a human-being mirror which demonstrates the comparison with others.

I have just written my conclusion in the above one line. The above line is my learning. I wrote it at first. Because I want to avoid the divergence.

It is obvious that people have different views and patterns of behaviour but when it comes to the matter of responsibility and collaboration, it somewhat crashes. It made me realise that Sense of Responsibility and Sense of Remorse are something which also defines our deep culture.

Bangladesh-Japan Exchange Project(BJEP-2021) was a watershed in my life. I hadn't thought that I would be one of the leaders of BJEP-2021 organising team. For a leader, the challenges, experiences, observations and learnings are always different. If I put them all into words, it will be page after pages. For me, my first concern was to look for the perfect mutual collaboration, which, according to me, requires a sense of responsibility. To simply write about BJEP-2021, this time the program neither everything went well nor did everything go wrong.

This is what happened, the absence of professionalism. Among many consequences, two of them are: some worked hard and some hardly worked.

To me, This year's Exchange Project helped me to practically realise the importance of introspection, an introspection for better understanding of one's own values and standards. I was keen on exploring why one was behaving in a particular way.

Talking about the goal, we tried to make participants feel and realise what defines a human being through several peer to peer discussions so that they can compare and reflect with their pairs about their own thoughts, feelings and reasons for behaving in a particular way. If we don't compare, we won't be able to find our own thoughts and feelings that matter most. The idea of peer to peer discussions was to become a mirror for each other's peers so that each can see the reflections and each can compare, even though there were times when the scheduled time passed without deepening the discussion. I think we have somehow achieved the goal in this case. Participants were able to think about themselves in a new way. They learned from each other. They realized how different perspectives shape a human being.

On the other hand, the reality for me compared with the participants was far more broad. There were a number of moments with which I had to show my fullest sense. There were moments at which I had to think of solutions from various angles. For me, It was a test of my perseverance and I didn't want to give up. The realization of having multifaceted perspectives got stronger inside me because of BJEP2021. I added to my previous knowledge of how important it is to have a calm bird's-eye view of a particular situation. But also there were times when I barely got time to think about the situation. At that time, I had to make a decision as soon as it appeared. What was important there is to know all subtle aspects of that situation carefully. I can firmly remember that I was having even two or three meetings and phone calls at the same time such as while talking on the main ZOOM room with the supervisor, Prof. Akinori Seki, a member called me on Messenger from the breakout room of the same ZOOM meeting. On the other hand, at the same time another member dialed my number on another phone to speak. I had to tackle and keep track of all what was happening. Because a little lapse could cause a big fissure in the communication and understanding. The situations like that made me increase my multitasking ability. There were more moments about which i wanted to write but i have to keep in mind the word limits.

But I hereby confess that preparing Day 4 of the programme was obviously one of the unforgettable experiences of my life. It is Naho who should be commended by me and the rest of the members for helping me with all her efforts. It is her from whom I deepened my values of making a comfort zone for others. On the other hand, there was a leader from the Japanese side, who worked with me side by side. It is Ririka whose consistency over everything made me become stronger to tackle a situation. She was a big support for me. She made me realize how collaborative a leader should be. During the programme, I didn't even feel that both of them were freshmen. In addition, it is mandatory to mention the name of Alia Shamim with whom I even worked until 4:30 AM. It is a perfect example of collaboration that I experienced.

And finally I got some space to formally show my deepest gratitude to Professor Akinori Seki who thinks I am his friend. I am mostly grateful to him and grateful to the Asia Association of Education and Exchange(AAEE) for shaping my development which is why i had concluded with the first line. 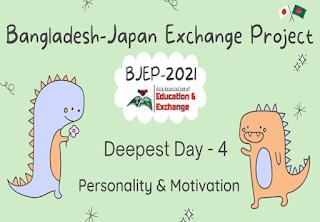